Is Murphy a real dog?

Yes! Murphy, from On The Edge and the Blue Spruce Lodge series, is based on a goofy mutt who lives with my sister and her husband. Sometimes I refer to Murphy as a rescue, but as with many people who adore their pets, it’s a toss up who rescued whom in their family.

My brother-in-law was visiting his parents when he found Murphy running amok without a collar. He took him to the local SPCA who said his owner had tried to turn him over a few hours before. He was from out of town and seemed to have turned Murphy loose as a solution to his problem. Maybe the dog wasn’t traveling well? We don’t know.

In any case, my brother-in-law left him there, but he has a history of busting dogs out of jail. It didn’t take twenty-four hours before he was back there, bringing Murphy home.

Murphy was not fully grown, which became tricky at the apartment they were leasing. He was bigger than what they typically allowed, but a few life changes later, they moved into a house with a back yard and a dog park nearby.

He’s the kind of dog who needs his exercise or he goes squirrelly. Here he is acting like one–a squirrel, I mean. 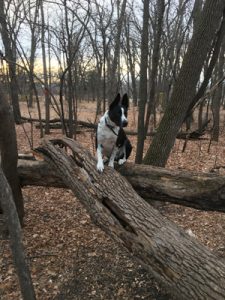