I was a reader from a young age. This is me at the logging camp where I spent my first two years. 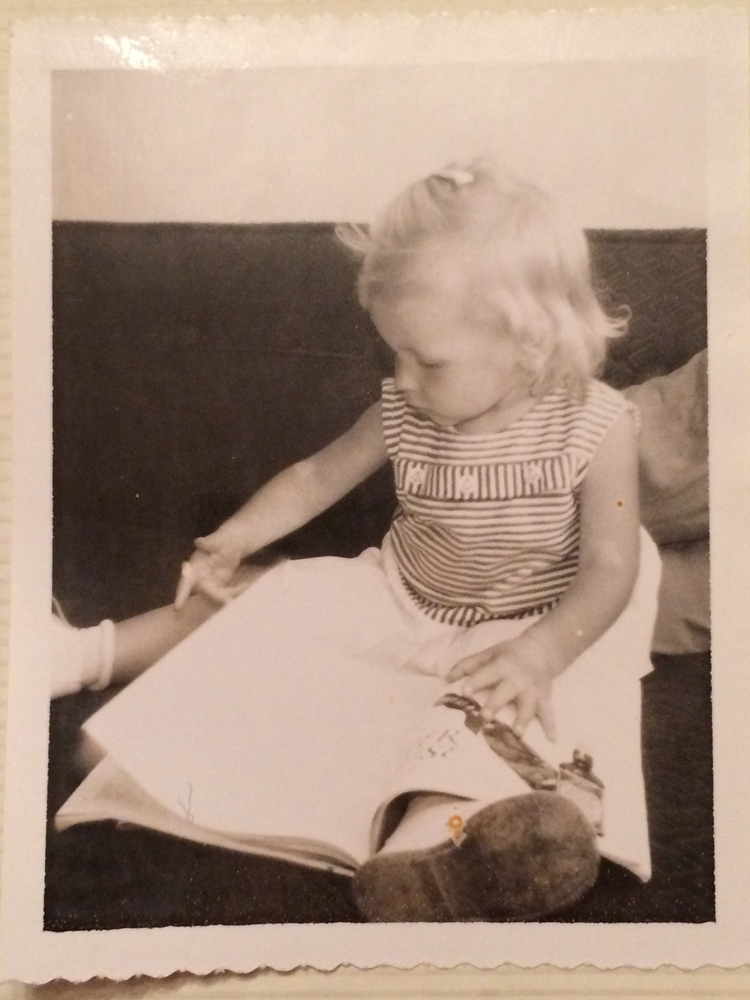 Later we moved to a small farm in Maple Ridge where my grandmother lived next door and the school library was my best friend. Cable didn’t come to our neck of the woods until I was twelve.

High school was a number of questionable hair and fashion choices. 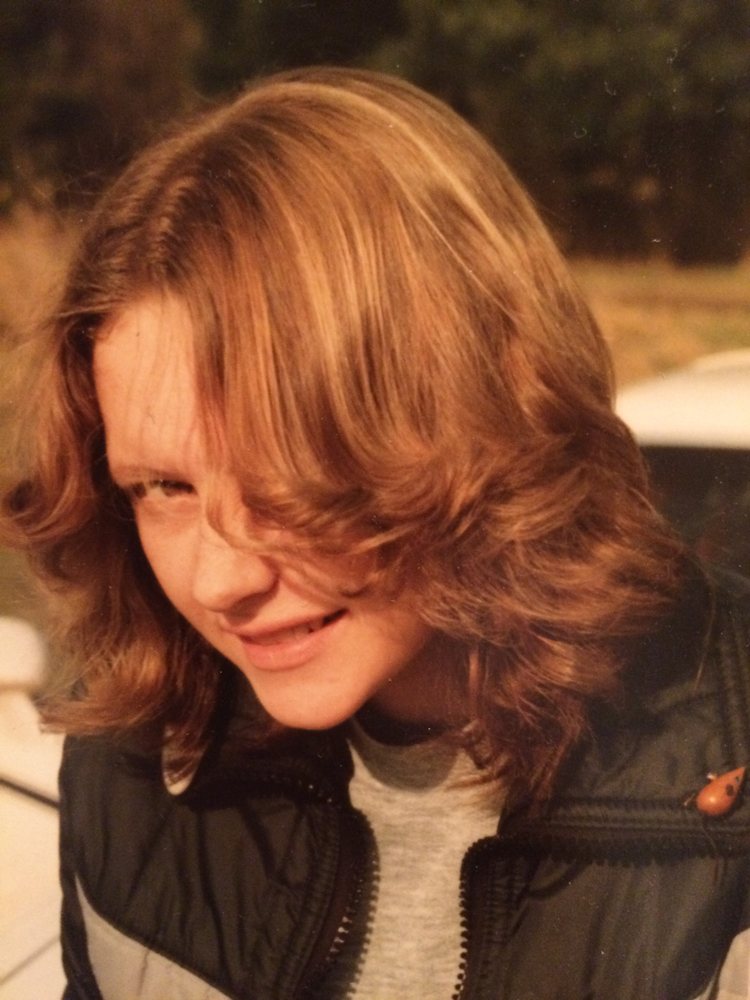 Did I think wearing a boy’s jacket made me look tough? I know the Farrah Fawcett curl only happened properly on one side of my head. I think this was the good side. I can’t recall why I loved that mouse pin, but I did.

I also fell in love with my first romance novel in high school. I don’t remember much about the actual story, just the amazing setting, a heart-stopping kiss, and a happily ever after. I knew this was my kind of book and long before I graduated, I knew I wanted to write these kinds of books for a living.

This guy also happened while I was in high school. His name is Doug. We share near-sightedness as our distinguishing trait, making us perfectly suited to one another. 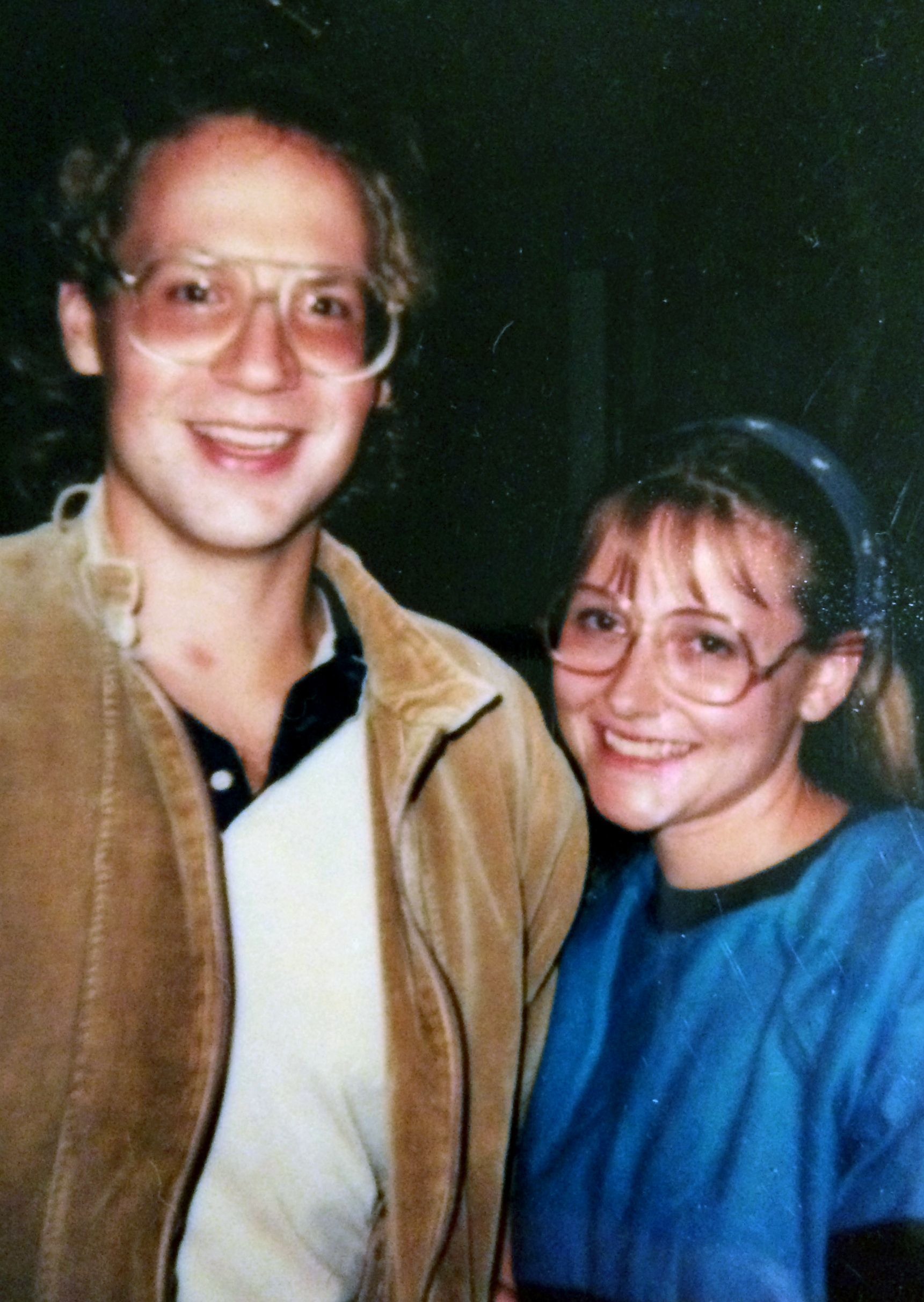 We were so young when we moved in together, it was practically against the law.

I began writing my first romance at twenty-one and, fun fact, received my first rejection from Harlequin Presents shortly thereafter. (‘Fun’ is an overstatement. Rejection sucks.)

This happened and it was genuinely fun. 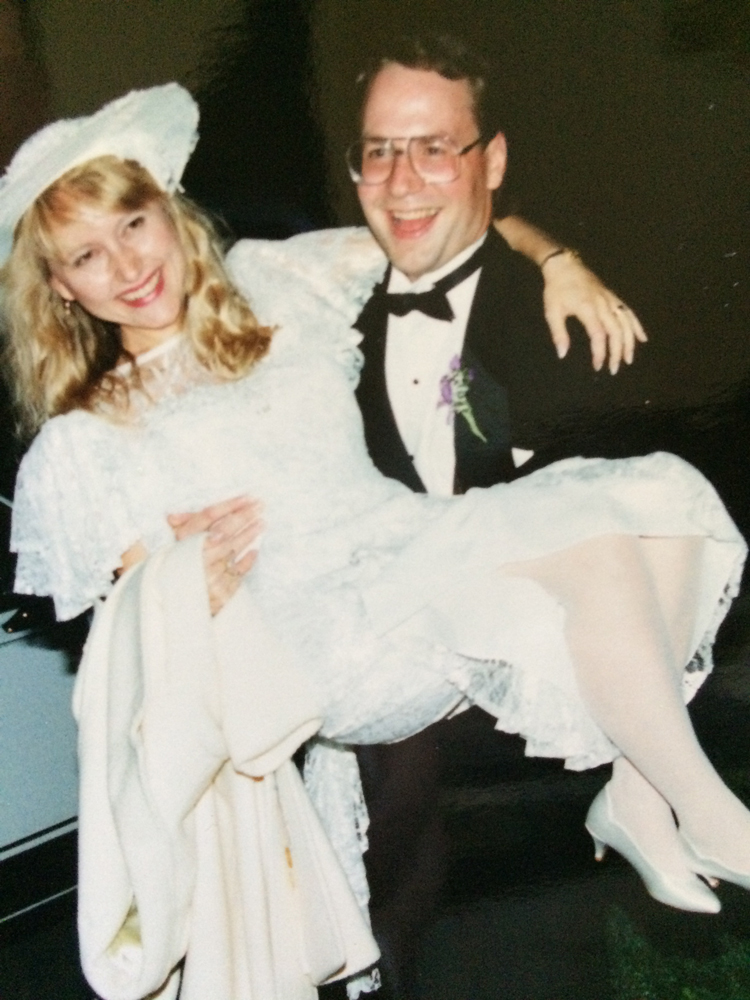 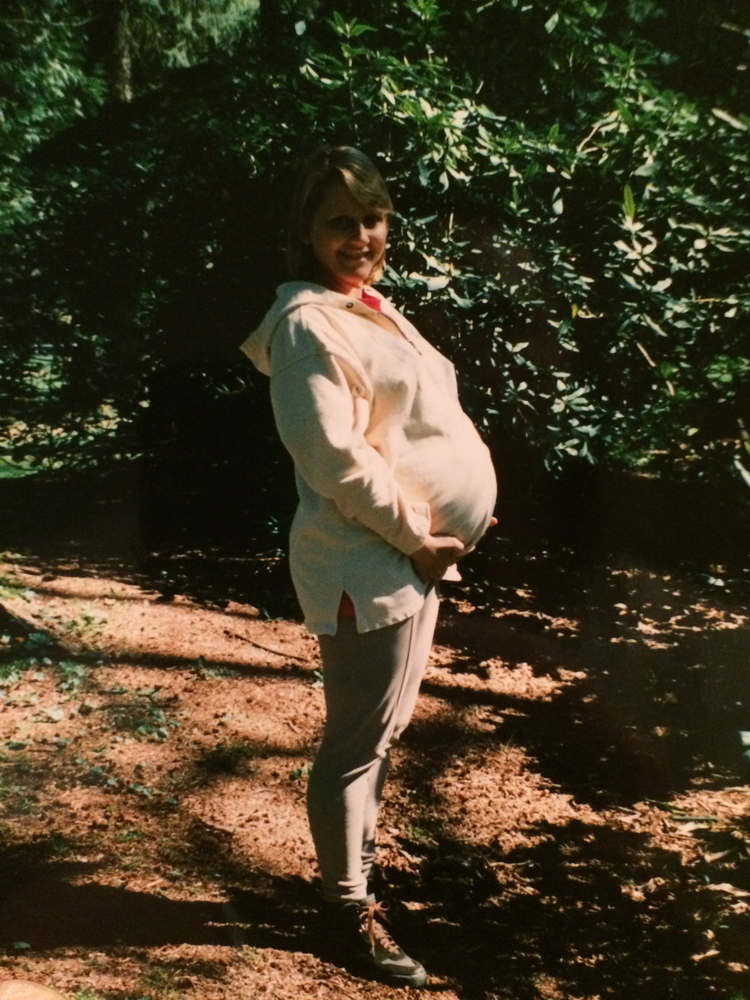 Another fun fact: Both of my newborns were over ten pounds. That’s not a misprint. Actually, the part where I called it ‘fun’ is sarcasm. The ten pounds is for real. Thank goodness the kids turned out to be a riot.

I continued to write around my daughter and son and various office jobs. Rarely a day went by when I didn’t imagine myself quitting to write full time. 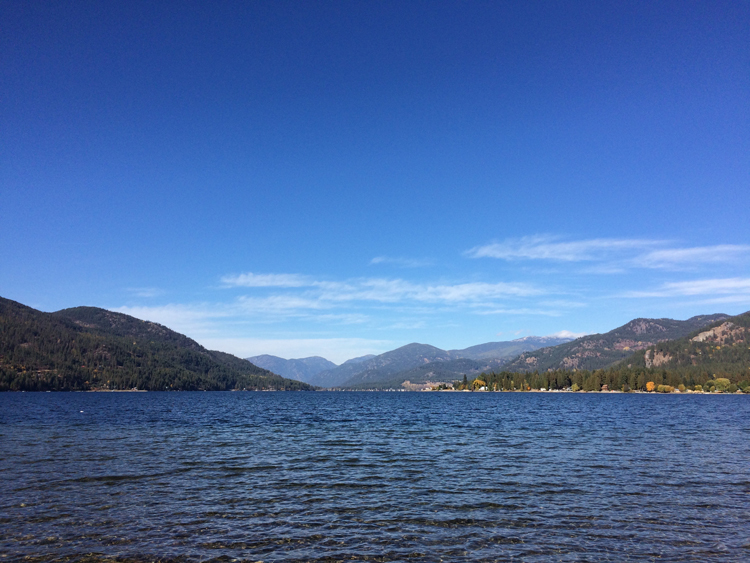 I thought my ship had come in. I was a stay-at-home mom writing for the local paper. I concentrated on finishing manuscripts, but when money got tight, I took a part-time job in yet another office. It turned into a fulltime job and I kept writing on the side, still hoping, dreaming, of someday writing romance as a career.

I should mention that along the way, much like a gambling addict, I had just enough success to keep me going. I placed in several writing contests. In  2002, Hustled To The Altar was a Golden Heart finalist. It later made it to the top four in the American Title finalist.

I eventually indie-published it and it’s now for sale along with the rest of my books.

In 2008, I was notified that I was a runner up in the Instant Seduction contest with Mills and Boon in London. It took me another four years, but one fine morning in May of 2012, they called to offer me a two-book contract.

That book was No Longer Forbidden, which they then explained would only be for sale in the UK.

You can imagine that, after waiting twenty-five years, I had mixed feelings. I had really been looking forward to my book coming out in stores where I could touch it and know it was real.

Thankfully, when my first Harlequin Presents did release in North American this happened: 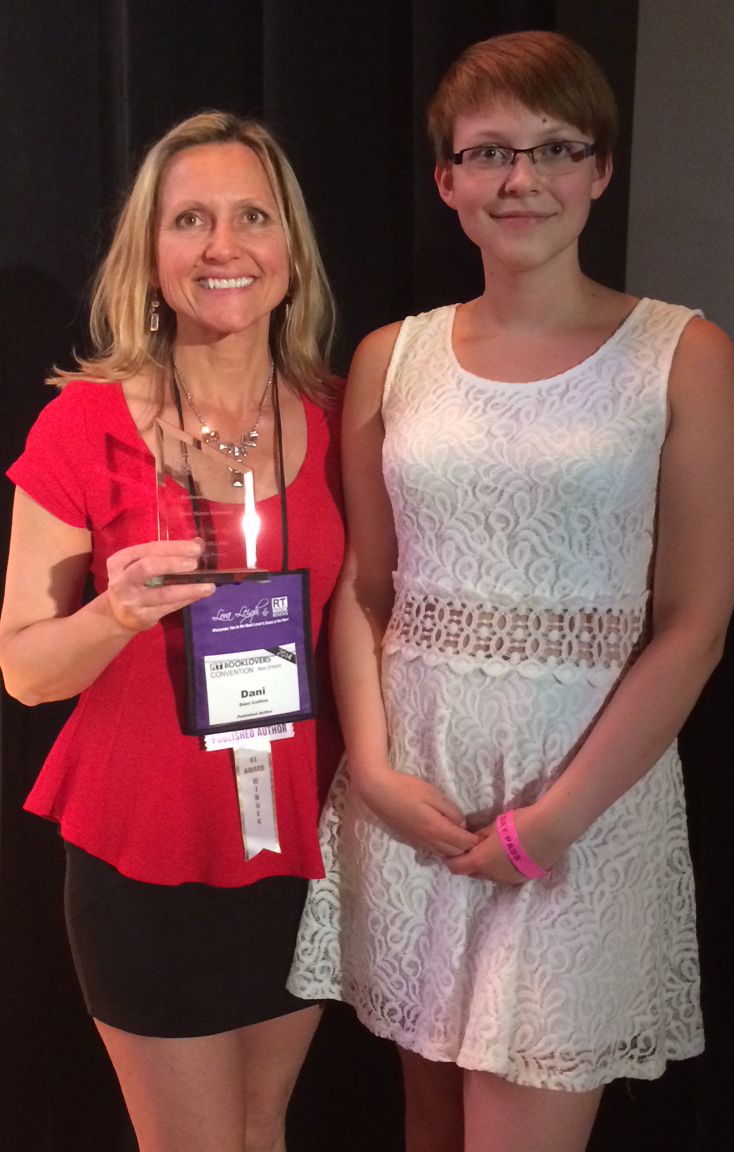 Proof Of Their Sin won the Reviewer’s Choice Award from Romantic Times Magazine for Best First In Series. That’s me with our daughter, Delainey, in New Orleans, accepting the award.

Here she is with our young hero, Sam. They are are my magnum opera. (Wiktionary informs me that ‘magnum opi’ is not the correct plural of ‘magnum opus.’) I don’t call them that because they were monster newborns, but because they are truly wonderful human beings and we’re insanely proud of them. 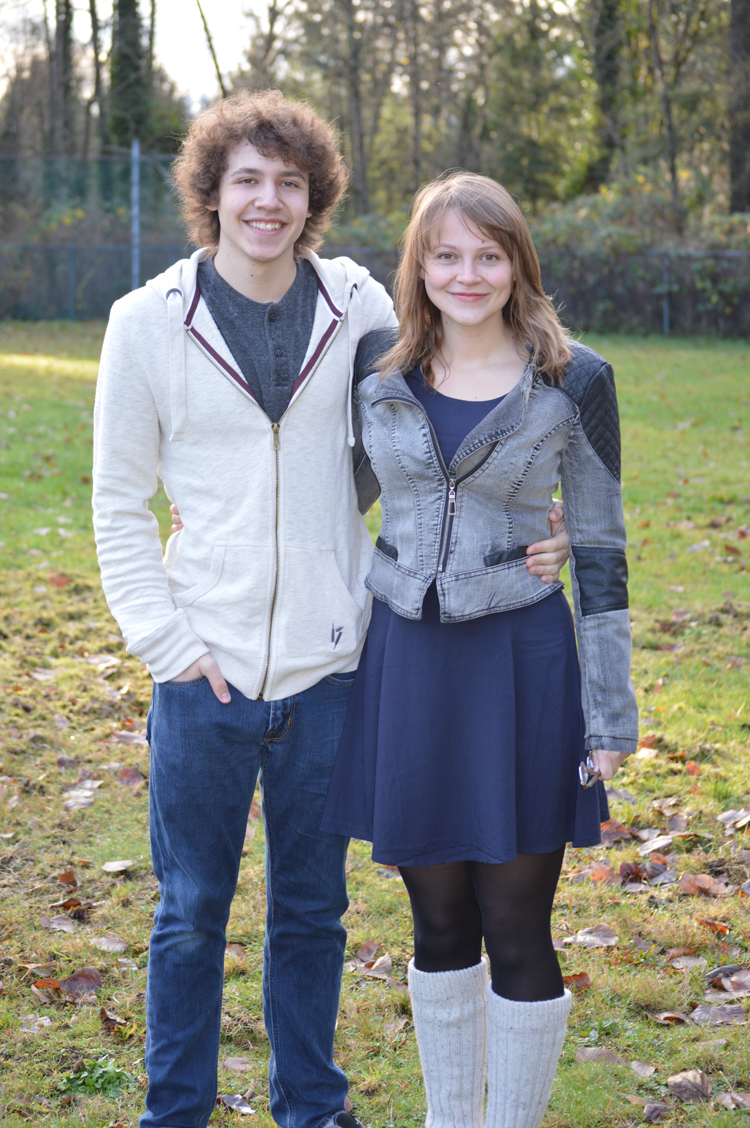 Talking about magnums of opus, however, check out this shelf. Each time I receive a box of author copies, the first book out of the box goes here. You can see I’m running out of room. This is not something I foresaw when I was dreaming of publishing, but it’s pretty darned cool and I’m proud of that, too. 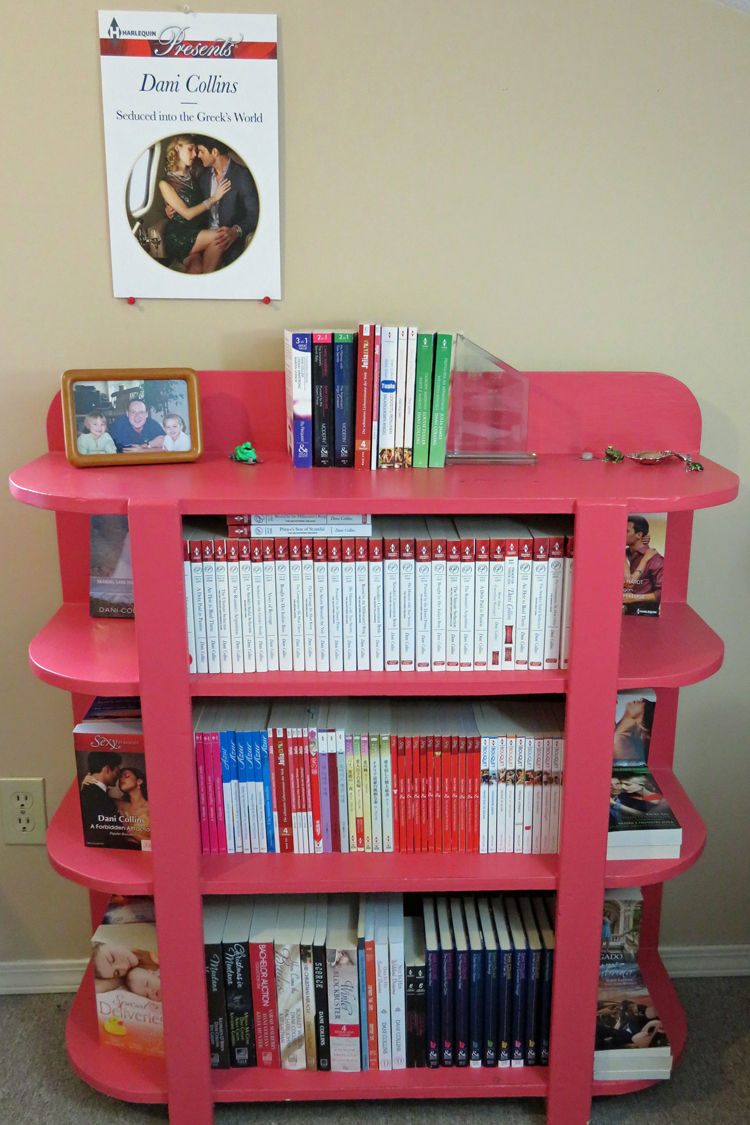 I didn’t really foresee this, either: 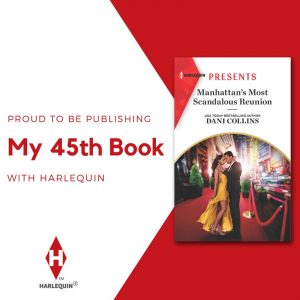 Writing is my day job. I write full-time, mostly for Harlequin Presents, but I’ve written for other publishers including several books for Tule’s Montana Born. I have also indie-published some titles that didn’t fit with other publishers. In 2023, I’ll be starting a new series of Western Historical Romances with Entangled: Amara.

I love my job! It’s as fun and fabulous as I always hoped. I’m truly living happily ever after.

Want a tour of my office?

Check out Fast Facts, Career Highlights, some Media Mentions, and a lot more about me in