Hot Off The Press

Make and early claim on A Convenient Ring to Claim Her

Are you waiting (im)patiently for Book Three in my Four Weddings and a Baby quartet? Good news! You can get A Convenient Ring to Claim her today if you shop Harlequin or Mills & Boon UK. 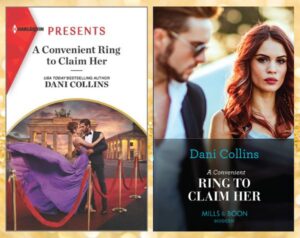 Quinn and Micah are one of my favorite couples ever. First of all, they’re having a secret affair. Who doesn’t love that? They’re deeply in love and *will not* admit it, even to themselves. They have a horrible fight and Quinn gets injured and Micah gets to feel awful about it.

And there’s an epilogue that will leave you with a huge lump in your throat. Promise!

What are you waiting for? Grab it from Harlequin or Mills & Boon UK today.

(Or click here for more preorder links. A Convenient Ring to Claim will release on all platforms Feb 28th.)

Netgalley Reviewers! The Prospector’s Only Prospect is Available

Are you a reviewer on Netgalley? Would you like an early peek at a grumpy single-dad and a spicy mail-order bride who actually doesn’t want to get married again set against the Colorado gold rush?

My historical Western, The Prospector’s Only Prospect, is available there for early review. Check it out here. 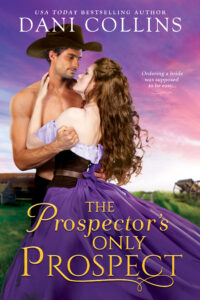 Request it on Netgalley

If you’re not a Netgalley reviewer, you can:

Limited Time Price Drop! Married For One Reason Only $1.99

Goodbye January Blues. I have the cure right here!

Married for One Reason Only is the first book in my Secret Sisters duet–twins separated at birth by an evil villain.

I love everything about these books! The intrigue and passion and sexy heroes and the wonderful reunion of the sisters who didn’t even know about each other until this book starts to pick apart their past. Here’s the blurb: 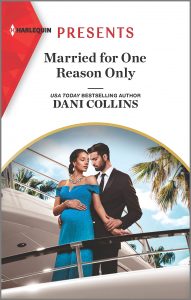 …for their baby’s sake!

His brief was simple: confirm whether model Oriel Cuvier is the secret daughter of a Bollywood legend. But when billionaire security specialist Vijay Sahir locks eyes with Oriel, all thoughts of work disappear—leading to a few stolen hours where all rules are broken…

Weeks later, Oriel gets two life-changing surprises. First, the truth about her birth mother. Second, she’s pregnant with Vijay’s child! He demands marriage, but can she really promise to honor and cherish him when, until now, all they’ve shared is one extraordinary encounter?

Be sure to read Book Two in the Secret Sisters duet, Manhattan’s Most Scandalous Reunion.

Blurb Reveal for The Prospector’s Only Prospect!

Ordering a bride was supposed to be easy…

I’m so thrilled to share the full, official blurb for The Prospector’s Only Prospect, along with the cover flat for the print version, which is ever so pretty.

After eight days in a cramped stagecoach, divorcée Marigold Davis already regrets her decision to come to Denver City to marry. She certainly didn’t realize she’d signed up for mosquitos, mud, and scores of rough men eyeing her like a hot meal on a cold day. But with her life in Kansas all but incinerated, Marigold needs a husband. Even if she’s not the bride that gold prospector Virgil Gardner is expecting…

Virgil Gardner has a reputation as a grumpy hard-ass, and he’s fine with it. He’s also no fool – this is not the woman he agreed to marry. It takes a tough-as-nails woman to survive the harshness of a Rocky Mountain gold claim, and this whiskey-eyed, gentle beauty is certainly not the type. Now it’s just a matter of how quickly she’ll quit, so he can find a wife who will stick. Someone who can care for the only thing he values even more than gold–his children.

But Marigold isn’t about to give in. Cramped in a one room shack. Berry picking turned into a bear escape. Or, cooking for an entire crew of bottomless pits. She’s got more grit than most. And just when Virgil starts to realize his replacement bride might be the treasure he’s been looking for, an unannounced guest arrives… to change everything. 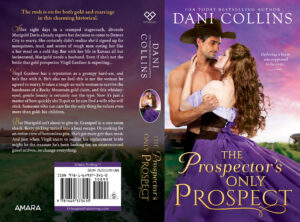 I’m very excited for you to read The Prospector’s Only Prospect which has lots of my favorite ingredients: a grumpy hero, a cheeky heroine, nature and children and interfering secondary characters. Also a slow-burn romance that gets hot, hot, hot and a sigh-worthy ending.

While you’re waiting, you can:

Add it on Goodreads | Read an Excerpt | Pre-order Your Copy

Beauty and Her One-Night Baby is on sale at Amazon US for $2.99!

Happily, I’m starting 2023 with a promotion on one of my top-selling books! And it seems to be on sale on both Amazon US and Canada. (Amazon won’t show me the kindle price overseas.)

Beauty and Her One-Night Baby has one of my favorite opening lines: Her water broke.

Javiero doesn’t even know Scarlett is pregnant, let alone that it’s his baby, but suddenly he’s in the hospital with her, watching her deliver. He has history with Scarlett, obviously, but she works for his recently deceased father. They’re very much at odds, but he wants his son. Here’s the blurb: 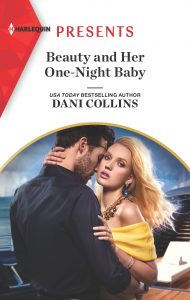 Beauty and Her One-Night Baby can be read as a stand-alone, but it is the second in my Feuding Billionaire Brothers. If you like to read in order, you’ll want to read A Hidden Heir to Redeem Him first.

The sale runs through January. Get your copy for 2.99 here!

Join me in the Entangled Insiders Party Room! 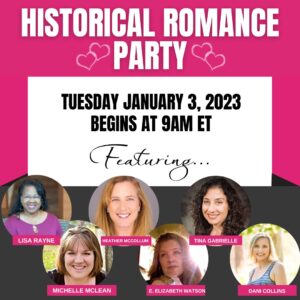 It’s my first one with Entangled and I’ll be chatting up my Western RomCom The Prospector’s Only Prospect (which comes out in March. I know, I know! Soon, though…)

I’m excited to meet new readers, but I’d love to see some familiar faces. If you have a minute, please drop by.

Innocent in Her Enemy’s Bed is a Kindle Daily Deal today!

Fun news! Innocent in Her Enemy’s Bed is a Kindle Daily Deal today, which means you can grab it right now for $1.99!

Ilona and Leander are a pair of my favorite characters. Ilona has managed to carve out a wonderful career despite her horrible step-family. Leander has a grudge against them so he targets her company, which leads to an uneasy (and lusty) marriage of convenience.

Ilona is so vulnerable, yet so brave, and Leander falls massively in love without realizing what’s happening to him. There’s a cute subplot between their PA’s, too!

The best part? It’s on sale today if you shop Kindle.

I’m so excited to bring you a Wedding Night With the Wrong Billionaire!

This second instalment in my Four Weddings and a Baby quartet shows you what happens after Eden is jilted at the altar. #SpoilerAlert: She runs away with the best man! 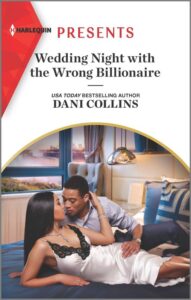 The man in the runaway bride’s bed? The tycoon she can’t forget!

From jilted bride…
To forbidden fling!

To save her business, Eden Bellamy must marry. When her perfect-on-paper wedding ends in humiliation, she flees…with best man Remy Sylvain! But picking him as her getaway driver might only add fuel to the fire, given that unforgettable kiss they once shared…

Their families’ rivalry makes Remy completely off-limits and Eden always puts her family first. Until it’s impossible for her to bury their red-hot attraction any longer…and, for once, the innocent is tempted to do something just for herself. Would claiming her wedding night with Remy be so very wrong?

FUN FACT: Wedding Night With the Wrong Billionaire! is my 50th title with Harlequin! 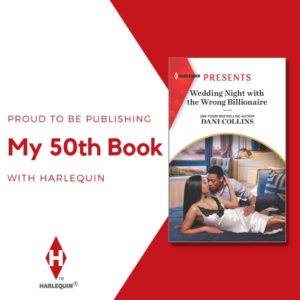 Wedding Night With the Wrong Billionaire is Book Two in my Four Weddings and a Baby quartet. They all stand alone, but if you like to read in order, they go like this:

Book 1: Cinderella’s Secret Baby
Book 2: Wedding Night with the Wrong Billionaire
Book 3: A Convenient Ring to Claim Her
Book 4: A Baby to Make Her His Bride

Have you joined my Fans & Friends Newsletter?

With all the doomsaying around Twitter, I thought I’d ask: Do you belong to my Fans & Friends Newsletter?

If you’re receiving this in your inbox, you’re probably already a member of my What’s New feed. If so, Thanks!

If you’re seeing this on social media, please consider joining one or both. They’re different, but both are pretty cool. 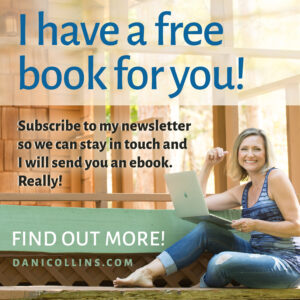 What’s New is my blog feed where you’ll get immediate news like price drops and new release reminders in one bite-sized email.

My Fans & Friends Newsletter is a longer note with all my latest book news, personal chatter about what’s going on in my life, gossip about what’s coming next, and sneak peak excerpts before anyone else gets them. Fun fact: you also get Cruel Summer, a free ebook short story as a welcome gift for joining.

Visit the Join Me tab on my website and pick your preference–Join both if you want to!

A Royal Price Drop! Today Only!

On sale today only! Get Ways to Ruin a Royal Reputation today (Nov 6th!) for 1.99 on Amazon.com.

And she’ll enjoy every delicious second! 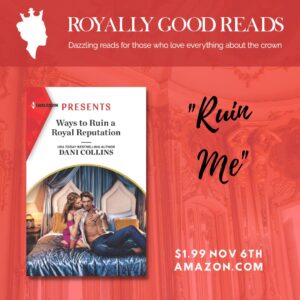 The king of Vallia never wanted to ascend to the throne. But in order to abdicate, Luca needs a good, old-fashioned disgrace. That’s where powerhouse PR pro Amy Miller comes in! Amy’s revived the career of many a star. She can certainly torpedo that of a reluctant royal.

But when instant attraction ignites with Luca, Amy’s soon starring in the scandal. And the fire burning between them is anything but fake news. But will this explosive flame be extinguished by what’s hidden in Amy’s past?

A Convenient Ring to Claim Her 💍 is almost here

The sun came out so the #yoga mat went outside too 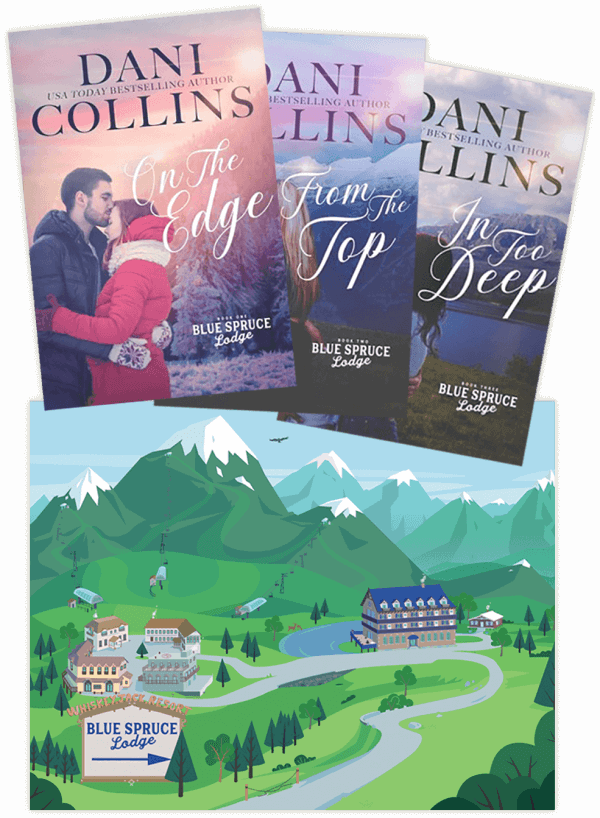