Big News! A New Cover and a New Direction

I am so excited to share that I’ve signed a two-book deal with Entangled: Amara for a pair of Western Historical Romances.

I would actually call them romantic comedy. (In fact, I have, in my newsletter when I was being cagey about what I was working on.)

I modelled my hero, Virgil, on James Garner in Support Your Local Sheriff. He’s a reluctant hero, tough and smart, but he has a chewy-soft centre, especially where his three children are concerned (even though he doesn’t have a clue how to parent them.) 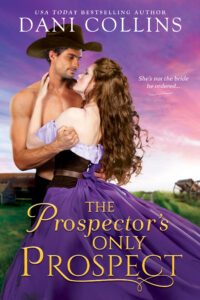 Virgil places an ad for a mail-order bride and is delighted when he gets a response from a well-educated young lady who describes herself as cheerful and kind.

That would be Marigold’s sister. Marigold is divorced, recently had her house burned to the ground, and took her sister’s place at the last moment out of sheer desperation. Virgil is not thrilled.

They strike a deal and he takes her to Quail’s Creek, the camp where he and his partners mine for gold while she minds his children.

All this gold prospector needed was a nice, practical wife. Instead, a society darling divorcée takes her sister’s place as a mail-order wife, desperate for a new husband. They’re both about to get more than they bargained for…

I can’t wait for you to get your hands on The Prospector’s Only Prospect! It will release in print and digital March 28, 2023.