Today I’m thankful for the cover I received for Innocent’s Nine-Month Scandal. I’m in love with it! Rozi goes to Budapest to find her grandmother’s heirloom earring and tangles with Viktor, the man who thinks the earring was stolen from his family.

This one comes out next April as part of a duet that I’ve been calling the duet Barsi on Fifth, after the family jewelry store where the heroines, who are cousins, design jewelry.

Control is everything to billionaire Viktor Rohan. Then Rozalia Toth appears on his mansion’s doorstep, looking for a family heirloom, and throws his world into chaos! Her sweetness intrigues him beyond measure…and as their inescapable chemistry explodes, Viktor realizes Rozi’s innocence isn’t an act! But their passion has consequences, and Viktor refuses to let scandal ruin his family again. Their baby will be legitimate! And Rozi? She will be his…

Be sure to check out Book One, A Virgin to Redeem the Billionaire. Gisella tries to buy one of the earrings from Kaine only to learn he has a grudge to settle with her family–and expects her to compensate him. 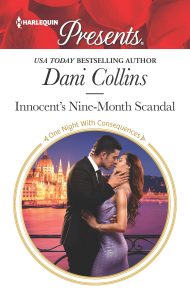