Get Snowbound early from Harlequin today!

Are you one of those people (like me) who celebrates New Year’s Eve at 9pm then goes to bed? Why wait, right?

Here’s some good news if you like to get to the good part sooner than later… You can get my January book, One Snowbound New Year’s Night, direct from Harlequin.com or Mills and Boon UK today, one month early!

One Snowbound New Year’s Night is a reunion, second-chance, force proximity romance with a Canadian hero, an Australian heroine and a single night for them to maybe, hopefully, save their marriage. It’s sweet and sexy and emotional and sometimes even funny. I hope you adore Van and Becca. I do! 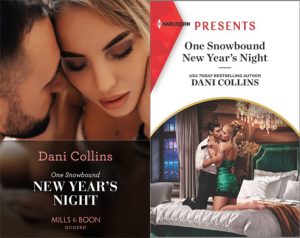 One Snowbound New Year’s Night will release in print and all other platforms on Dec 28th, 2021.