Look for Bound by Their Nine-Month Scandal on shelves now!

Want a romance with a hint of Halloween? Bound by Their Nine-Month Scandal opens at a masked ball!

When I was writing Bound by Their Nine-Month Scandal, I knew it would come out around October or November. I wanted my hero to be a bit of a jewel-theif so a masked ball worked perfectly for Angelo to infiltrate the estate where he was born. Plus, the new owners are Rico and Poppy from The Maid’s Spanish Secret. Poppy is Canadian so Halloween is a thing for her. She ticks off her mother-in-law with her costume ball, but it’s a roaring success.

It’s such a crush, Pia, Rico’s sister, slips away and runs into a masked stranger. They have a tryst on a rooftop, something she thinks is only a memory to hold close in her future marriage to someone else, but she turns up pregnant a few weeks later. Look for Bound by Their Nine-Month Scandal to find out what happens next!

Here’s what reviewers on Goodreads are saying about the hero: 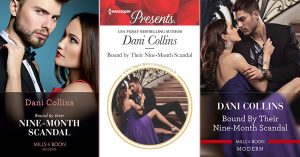 “…I loved Angelo. There was a lot of depth in his character. Despite his quest for revenge and forcing his hand with Pia and overall a complete alpha, he still understood her insecurities and was caring and tender toward her…” ~Brenda, 5 stars