Title Reveal – In Too Deep!

Are you waiting for Blue Spruce Lodge, Book Three? Soon, Dear Reader. At least, I have the title, blurb and release date for you…

In Too Deep will be released August 7th:

At her wit’s end with her twelve-year-old niece, Wren Snow takes the manager’s job at Blue Spruce Lodge so Sky can get to know her father, Trigg Johanssen—a tycoon snowboarder with a playboy reputation.

If you haven’t started this series yet, here’s what readers are saying on Goodreads about Book One, On The Edge:

“This is interesting, intense and engrossing. Rolf is confident, condescending, cocky and stubborn. Glory is smart, insecure, weak and snarky. Rolf is such a super dick in the beginning, but he gradually developed into a caring and kind man. And what he does at the end is adorable.” 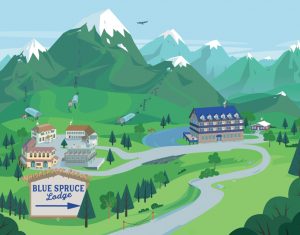