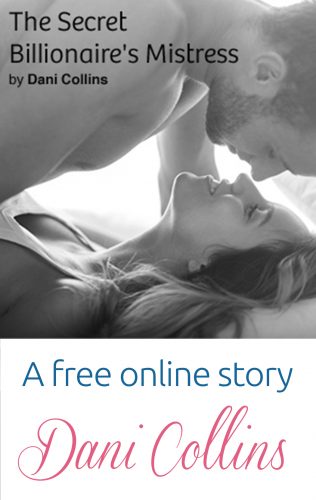 For Billionaire playboy Sebastien, marriage was never an option. Until his mistress Monika gives him an ultimatum, and he risks losing everything…

Prequel to the Secret Billionaires trilogy. Look for these full-length novels: 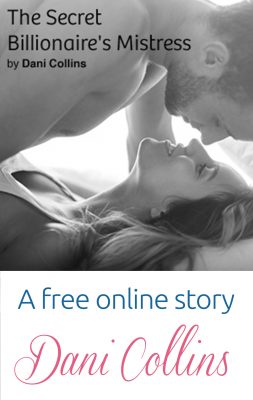 “Are you picturing me in my underwear?” she guessed.

I had such a great time writing The Secret Billionaire’s trilogy with Jennifer Hayward and Rachael Thomas, but after we had all our books submitted, I didn’t feel quite done. We had invented a character, Sebastien, who makes the bet with all our heroes that they can’t go two weeks without their fortunes. I thought, Wouldn’t it be fun to see him win the heart of his own true love? I pitched it to my editor and she agreed! Enjoy! 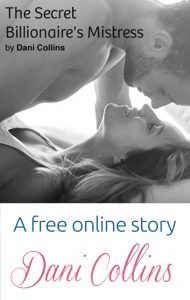 Monika Lundquist was still processing the way a simple handshake with Sebastien Atkinson had left her entire arm tingling, when he asked, “Shall we dance?”

“I—” She was at this mixer atop a London hotel to network, not entertain the biggest player in the room. She couldn’t be rude, though. “Thank you. That would be lovely.”

Neither could she deny that she’d been intrigued from the second she’d spotted him prowling the room like a mountain lion, athletic and aloof, gaze missing nothing. Women went mad for more than his bank account. He oozed sex appeal, making her hyper aware of his light touch in the small of her back as he guided her toward the dance floor.

She silently bemoaned no longer owning Paris originals, only a nice-quality black velvet skirt from the consignment store and a sleeveless silk top. Her pearls were fake, her hair and make-up done over the sink in her very modest flat.

He knew how to waltz, leading firmly, arms caging her close without being fresh. It was oddly reassuring, but she knew better than to think a man in his position offered a woman any security beyond jewels she could pawn to make rent after he moved on.

Even so, she couldn’t help appreciate the hard shoulder beneath his bespoke suit. Her senses heightened as his thighs brushed hers, sending butterflies through her abdomen and making her blood sing with awareness. It took effort to dance smoothly and betray none of it.

“You spoke very passionately,” he said. “I’m one of those types you mentioned. I know I can do more to help the less privileged, but I don’t know where to start.”

Their hostess was the wife of a politician who ran a foundation alongside Monika’s employer, Raise For Rights. She had kindly offered Monika a few minutes at the podium to speak about RFR and their ability to tailor programs for corporations.

She lifted her gaze, thinking to add something intelligent to what she’d said in her speech, but found herself mesmerized.

People called her Nordic looks angelic, but with his short blond hair and clear gray eyes, Sebastien was the fallen angel. He had aristocratic bone structure, even though she knew he came from peasant roots. Flat broke, on the dole, hard-life roots. He had built his fortune on adventure clubs, starting with extreme sports, filming them for niche markets. Eventually he branched out to mainstream excursions and, now his fortune was made and the sky was the limit. He turned up on television, owned specialty media channels, had his own line of sporting gear among other interests and a net worth in the billions.

“Will you give me your number? I’d like to have dinner.”

The invitation was so smooth, she caught her breath. And she was tempted, despite having learned at nineteen not to let men like him take advantage of her.

“To develop a program?” She deliberately misunderstood him.

His gave her a hooded look of reassessment. “You’re not here as a spokesperson? You work for Raise For Rights?”

She wasn’t surprised he dismissed her as their pretty face, but she was disappointed, especially as she realized, “You recognize me. Let me guess. Swimsuit catalogues fall within your scope of interest.”

Inside the dark gold frame of groomed stubble, his sexy mouth tilted into a self-deprecating smirk. “Sports of every kind. Purely professional.”

“I’m sure. But I left modeling. This is my career.” She was not a supermodel trophy, she took pains to say. She was a low-paid office clerk. By choice. “Most of my duties are administrative. I presented tonight because my boss was unavailable.”

“That seems to be doing things the hard way. You could fund your organization for a year on a single photo shoot.”

“There are legal considerations.” She’d been asked this more than once and her tone cooled to subzero, every single time. “My stepfather earns a cut from income off my image and he’s made enough as it is. Plus, it’s tasteless to use luxury underwear to benefit the underprivileged.”

He didn’t say anything.

“Are you picturing me in my underwear?” she guessed.

“Also wishing I’d thought to take my clothes off for a camera back when I was borrowing money from loan sharks. I can’t stand a missed opportunity.”

“There’s still time.” And darn him, now she was imagining him naked. In his mid-thirties, he was in his prime, probably sculpted like a Greek god. She’d bet that tan on his throat didn’t stop between his flat abs and the tops of his thighs.

He knew what she was thinking. Their gazes met and held. Behind the humor, sexual awareness crackled and sparked, holding them pinned as the music stopped.

“Let’s go for dinner now.” His hand at her waist shifted in the smallest, most subtle of caresses. It sent a rush of heat to her loins and made her breasts grow heavy and prickly.

She blushed, embarrassed that he aroused her, easily, and she couldn’t hide it. “You’re very good.” It came out husky.

“I thought we were seducing each other.”

Oh, he was dangerous. She dropped her hands and stepped back, then wished she’d stayed in his arms. Which was insane.

“I’m here to work.” She stopped herself from adding a pithy, Some of us do. Despite herself, she found the self-made in him intriguing. Oh heck, she found all of him utterly fascinating.

“Let me introduce you around then.”

He knew almost everyone and smoothly approached anyone he didn’t. It was remarkable to watch people react to him in varying degrees of awe. At the same time, she saw how he let people assume they were together. He didn’t throw his arm around her, or make any outward claim, but she was not available, he telegraphed. She weakly let it happen and, for the next hour, understood what it meant to be a ‘power couple.’

“I feel like a fake,” she admitted as they went back onto the dance floor. “Like I rode your coattails. Were you humoring me?” Part of her didn’t care. It felt good to be held by him again.

“I respect a work ethic and understand the value of connections. It’s how I’ve come as far as I have.”

“I saw a program once about your adventure club. The Armchair something. It said you deliberately targeted well-connected young men when you were starting out. With a zip-line in Costa Rica, if I recall correctly?”

“I invited a few women, but yes, mostly rich young men who liked the appeal of an elite club and the risk of extreme sports. I played to their egos and dared them to accept. Very calculated, knowing I might cash in on the social connections later.” His lip curled with a hint of disdain, but there was disparagement for himself. “I didn’t expect we’d all love it and still be doing it fifteen years later.”

“You still do the challenges yourself? Are they dangerous?”

“The last was a race on wild horses across eastern Russia. Danger is the point.”

“You accused me of doing things the hard way!” She was oddly concerned for him, but had to ask, “Did you win?”

“Not that one.” He made a face that told her he hated losing. “A long-time member, Alejandro Salazar, is a wizard with horses. Unbeatable. I was happy to come away with a broken finger. Other injuries were worse.”

“I don’t understand the appeal. All of the members are rich? Why build a fortune, then risk your life and limbs?”

“Self-reliance, I suppose. And it levels life’s playing field. We’re all equals there.”

She suspected he meant it proved he was equal to, sometimes even better than, the people he’d once aspired to become. No wonder he thought her odd for not making the most of the advantage she’d been handed with modeling.

At the same time, the primitive female in her reacted to his well-tested strength. A fresh beat of want thrummed for the alpha male resourceful enough to slay tigers and provide for his mate and offspring.

“Plus, you never know what you can achieve until you try.”

She lifted her face to meet his gaze, feeling as though he saw into her soul. Those were exactly the words she’d clung to, when she had sought the courage to leave modeling and discover if there was more to her than long limbs and the ability to hold a pose.

As if she had invited him with her uplifted face, he stopped dancing and kissed her.

Distantly she wondered if he was taking advantage of an opportunity, or seeing what he could achieve, but between heartbeats, ceased to care. She only wanted more.

Part of her understood they were making a spectacle, but his mouth on hers was both carnal and tender. Here was the man who climbed rock walls with his bare hands, understanding patience and finding the right fit, the right spot to settle in while he explored all that was within reach with an unhurried touch.

Wildfire rolled through her, not tame enough to be called seduction. This delirium was… What had he called it? An expensive high, but an addictive one.

When he lifted his head, she was altered. Emptied of the old Monika, glowing with a new, brighter sense of possibility.

She nodded jerkily, knowing she was agreeing to go home with him. Eager to. Yearning for more with him, whether it was the light brand of his splayed hand against her spine, or another kiss, or his no doubt thorough and skilled possession.

Yes , she thought. Yes and yes and yes.