Another sexy cover for the Innocent in the Sheikh’s Palace

How adorable is this cover?

Here’s a little snippet from the opening that sets the tone for how Hannah completely undermines Akin and still cracks me up. Hannah arrives at the fertility clinic (where she will soon learn she is carrying Akin’s brother’s baby.) She realizes her door has frozen shut and calls out to the men who are walking by: 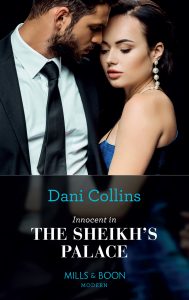 “Help! Excuse me! Can you help, please?”

She heard one ask a question in a language that might have been Arabic. They wore woolen overcoats and their heads weren’t covered, but they both had dark-skin, black hair and closely trimmed beards.

“I need help!” she shouted louder as they stood there. “My door is frozen.” And I’m going to need a powder room ten minutes ago. Panic stations, gents.

The one with the umbrella grumbled something, but the other impatiently took it. It was useless anyway. A gust of wind drove the sleet sideways, turning the umbrella inside out. He shoved it back at the other man and came to glower at her through the little circle she’d made in the fogged glass.

Her heart leapt in surprise, alarm, fear. Maybe a hint of lust?

He was a blurred impression of height and intimidation, thirtyish and good looking despite his frown. His overcoat gaped and showed a dark blue suit that looked tailored and probably was. The clinic catered to the supremely wealthy. She was very much a charity case who’d got in on a who-you-know after doing a huge favor for the head administrator’s wife.

“What are you shouting about?” he demanded.

“My doors are frozen. I’m stuck!” She demonstrated by trying the latch and giving the door a shove with her shoulder.

He frowned and tried it himself. Then he circled her car, trying all the doors with enough force to make the car rock. None opened.

He said something to the man trying to fix the umbrella. A third man emerged from the SUV while the first came back to her window and asked, “You’re sure it’s unlocked?”

Oh, dear God. She wanted to die then. She pressed the button and heard it release.