Can’t wait for Confessions of an Italian Marriage?

“Although this is a typical Harlequin Presents book, with rich hero, world traveling, and sexy scenes; the story is actually very different from other HP books…I will read it again and again.” ~5 stars, A Romo, Goodreads

I can’t wait for you to meet Giovanni and Freja! He’s one of my favorite heroes ever. He’s confident and sexy and dynamic and has that one Achilles heel–Freja!

Freja is furious with him on account of his faking his own death, but she has some things to work out as well. They’re both hurting and both love each other very much, they just don’t know how to say it.

Here’s a little taste from the opening pages:

Freja moved without second-guessing her instinct. She scooped up her miles of skirt and ran silently on the toes of her five-inch heels past the door into the changeroom where she’d left her clothes and purse, past the powder room, into the administration office where she’d first met with Teresina and seen the—

That’s what this was. An emergency. She was alarmed.

She shoved against the lever and burst into the narrow, cobblestone alley. A loud bell began to ring within the shop. The door clattered closed behind her, muffling the sound. It grew fainter as she raced toward the street where traffic honked in its usual chaotic madness.

She was only thinking she needed witnesses. Getting arrested for stealing a dress she’d only half-paid for was better than facing whatever that man had in store for her. She could call Nels from the police sta—

Behind her, she heard the door slam open again. Shouts sounded.

In front of her, a black SUV swerved into the break in the sidewalk, forcing her to pull up short at the mouth of the alley. She started to pivot in hopes of squeezing past it and down the street, but the back door flung open.

“Get in,” Giovanni said.

The sight of him struck like a gong, leaving her quivering. He had a shaggy black beard, dark glasses, and his black hoodie was pulled up to hide all but his familiar cheekbones, but his legs stopped above the knees and she recognized the tense line of his mouth.

Alive. Her heart soared so high, it should have shattered the sky.

At the same time, a thousand furies invaded her like a swarm of killer bees. There was no triumph in learning she was right. There was only a crippling heartbreak that he had abandoned her. If he’d been truly dead, she would have been angry, but she wouldn’t have blamed him.

This, though? He had put her through horrifying hours of actually believing he was gone. She had endured his gut-wrenching funeral, convinced it was a sham. Then, two short weeks later, she’d suffered another unbearable loss that would never heal.

He’d forced her to go through all of that alone.

For every minute that had passed since that awful day, she had longed for him to reveal himself, but now her feet only carried her forward so she could bitterly hiss, “Go to hell.”

“Where do you think I’ve been?” he growled.

Confessions of an Italian Marriage officially launches September first, but if you’re anxious to read their journey to reconciliation, you can download today on Harlequin or Mills and Boon UK. 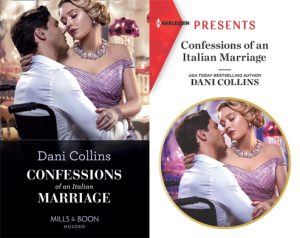