Cover Reveal – A Virgin to Redeem the Billionaire

This doesn’t usually happen, but I’ve received both my North American and UK covers for A Virgin to Redeem the Billionaire on the same day.

I can’t decide which one I prefer. The models are perfect in both. I adore everything in the NA cover from the way Gisella’s pink dress matches my website to the backdrop of San Francisco, but the UK one does such a nice job of capturing the mood between these two with the cool colors and smoky/tender gaze. 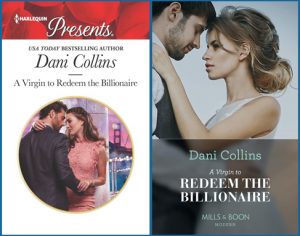 A Virgin to Redeem the Billionaire doesn’t come out until next spring, but now I’m so impatient for it to arrive! It’s the first in my Barsi on Fifth earring duet.

Until he learns of her innocence!

Self-made billionaire Kaine Michaels has just given Gisella Drummond, daughter of one of New York’s most influential dynasties, a shocking ultimatum: use her spotless reputation to save his own or he’ll ruin her family for betraying him! Kaine knows Gisella wants him, and he knows how much pleasure he can give her! But uncovering sweet Gisella’s virginity makes Kaine want her for so much more than revenge…

If you want to pre-order, quick links are here