I’m thrilled to report that Bound by Their Nine-Month Scandal is a National Readers’ Choice Award Finalist!

Sponsored by the Oklahoma Romance Writers of America (OK-RWA), the Readers Choice Award celebrates excellence in romance writing, as judged by readers. The winners were supposed to be announced at the National Romance Writers’ conference in San Francisco this July. Sadly, that conference has been cancelled, but they’re in the process of working out an online presentation. I’ll keep you posted.

Bound by Their Nine-Month Scandal released last November. Shy heiress Pia has a secret fling with a mysterious strangers at a masked ball. Angelo thinks he only wants revenge, but when Pia tracks him down to tell him they have a baby on the way, he discovers he wants his child…and Pia. 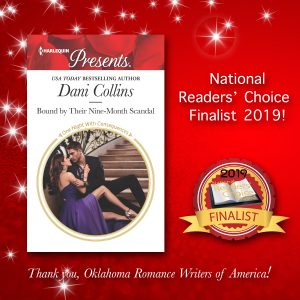 Painfully insecure and media-shy heiress Pia is duty-bound to marry well. So illegitimate Angelo is completely unsuitable husband material. Yet this irresistible Spanish tech tycoon seduces Pia with an evening of bliss…that leaves her pregnant!

Pia can’t afford a scandal, but Angelo wants to publicly claim his heir. To control the headlines, Pia must wed the only man who has ever made her feel. With Angelo posing a danger to her well-guarded heart, can she step into the spotlight—with the wedding of the century?