The Manga He Must Keep

Fun news! The first book in my popular baby swap duet, The Marriage He Must Keep, has been turned into a Manga! I adore these. The artwork is so beautiful.

I do sometimes think the title should say something like ‘inspired by,’ though. The stories often get changed up quite a bit. Here’s the blurb of the manga with the blurb from the original story below it. 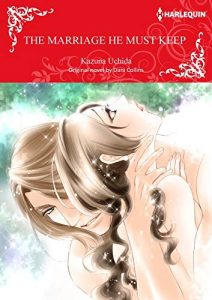 Shy Octavia marries Italian businessman Alessandro under her father’s orders. Their initial plans was for her to marry his cousin Primo, but he turned her down. She had been fortunate enough to be proposed to by Alessandro. He loved her day and night and she eventually fulfills her desire to become pregnant, but is shocked when he tells her to go to London on her own to have the baby delivered by a noted doctor. Why doesn’t he want to be with her?

Octavia had a reason to be concerned. Primo had told her the truth about her marriage and a certain plan that Alessandro had.

When Alessandro Ferrante dutifully married shy heiress Octavia, it was a pleasant surprise to discover that his convenient bride was as sweetly sensual as she was beautiful. But when their newborn baby is swapped at the hospital, their fragile marriage reaches crisis point.

With her baby safely back in her arms, the revelation that Alessandro’s family was involved leaves Octavia wanting nothing more to do with him. But Alessandro won’t take no for an answer…after all, in the bedroom she always said yes! He will seduce his wife again and ensure Octavia—and his child—are his forever!

Sounds like quite a different story, doesn’t it? I don’t mind, I just find it fascinating. Plus, it gives me something new to read in my very own story! Have you read many of the Harlequin comics? What’s your experience with how closely they mirror the original story?