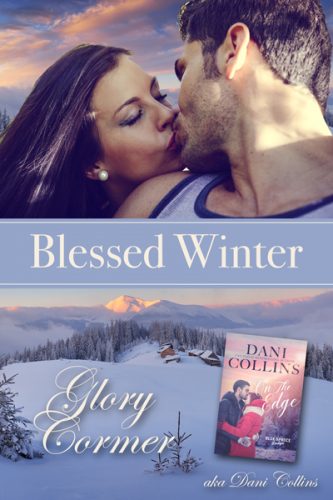 “I never saw myself playing father to some rock-god’s baby.”

After his brief engagement falls apart with his holiday plans, Brock is alone in Tahoe on Christmas Eve—until he bumps into the sexy waitress who ghosted him after their hot weekend last spring. And that’s quite a bump she’s sporting. Some quick math convinces him the baby is his.

Pandora’s rebound affair with Brock might have turned into something far more profound if she hadn’t turned up pregnant with her ex’s baby. She has always been on her own and is braced for parenthood to be the same.

When the town is booked out, however, and Brock has to spend the night in her apartment, she discovers she doesn’t have to spend Christmas alone. Brock plays Santa, then midwife. Could he take on the role of ‘husband’ and ‘father’ as well? 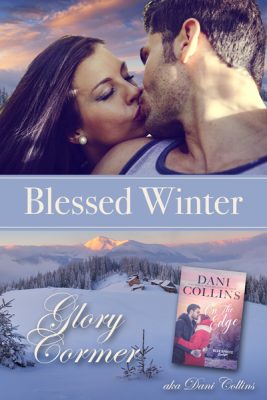 He was the full romance hero package with his warrior physique, his chartered helicopter, and his stony, arrogant expression.

— Glory, On The Edge

My kids will want credit for this idea, but it has been a team effort, it really has.

I had been wanting to write a series for a while, something longer with multi-generational characters, kids and dogs, plenty of relationships that needed massaging, but with a fabulous romance at the centre.

I had the name Rolf, a blisteringly arrogant hero, and Glory, a mousy heroine who didn’t feel she could live up to her ‘illustrious’ name. I wanted a setting or premise that would allow me to bring in jet setters like my Harlequin Presents characters, but also Regular Joes, like my Montana Born characters.

On a long car ride between our house and Calgary, where my daughter was going to school at the time, we brainstormed and she suggested a ski lodge. That immediately felt right, but it was two years before I started typing. I had a lot to think about, like how they wind up at the lodge and who all the rest of the books are about. I also yanked my brother-in-law into a convo about what would happen if there was an avalanche and what needs to be considered, soil-wise, for instance, to rebuild.

In that time, we updated our will. I was a published author now and had to designate someone to look after my literary estate. This got me thinking that my heroine might have a mom who wrote romance. Maybe my heroine looks after her mother’s posthumous publishing career. In fact, I soon decided, Glory also writes romance, but in secret. She was humiliated by a jock who read some of her writing aloud when she was in high school. She actually hates jocks like Rolf.

Then, because sometimes I don’t know when to quit, I decided she should write a book in real time while I was writing her story. It’s called Blessed Winter and it unfolds along with Rolf and Glory’s romance as they slowly–very slowly!–learn to trust one another. Fun fact: I have also been wanting to write a sequel to Cruel Summer and here was my chance.

Once I was knee-deep in this story, I ran into a few plotting hang-ups, as sometimes happens. I  wound up brainstorming with my son on a plane to Winnipeg. We were visiting my sister and her husband. Their dog is the inspiration for Murphy so they get credit for that character and my son gets credit for the name ‘Dirk Basco.’ My brother-in-law gets credit for the line, “He sounds like a failed country singer.”

My husband helped me with some villainous motivation, was kind enough to read the first chapters of this book when we were looking for a title, and always gets credit for keeping me alive while I fall into books and forget to take care of the house, him, our kids, or myself.

Finally, I am forever in debt to the fabulous team at Tule for going along with my kookie book-in-a-book idea as well as the rest of the series.

Blessed Winter: If you belong to my newsletter, you’ll have been given a link to download Cruel Summer. In that short story, there’s a brother-of-the-groom character named Brock. Readers have asked if I was going to write Brock’s story and guess what? Glory did! That’s Blessed Winter. 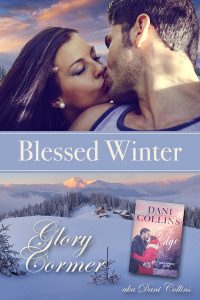 Brock hated shaving, but his upbringing demanded he scrape the stubble from his face on certain occasions, like Christmas. He wasn’t even celebrating this year. Not on the day, anyway. His parents and brother had taken off for Hawaii. He was supposed to be in Mexico with his girlfriend. Ex-girlfriend.

They had accidentally slept together after a staff barbeque in July. Everyone seemed to think they would make a great couple, so they’d given it a go. They had failed spectacularly right out of the gate. Not fighting. The total opposite. It was kind of ridiculous, in retrospect, how polite and considerate they had been toward each other, both trying so hard to make their relationship work simply because they were friends and co-workers and didn’t want to ruin anything.

Chemistry had been lacking, though. Brock had known by the twist in his gut that agreeing to Christmas in Mexico with her family was taking things too far.

She’d expressed relief when he’d given her the it’s-not-you, it’s-me speech. It’s both of us, she’d said. There’s nothing here.

But he was glad it was settled. The shitty part was that it left him alone for Christmas. He hadn’t been able to find a flight on Christmas Eve to join his family and didn’t want to stick around L.A. by himself. He had come to Tahoe, sans beard, forgetting until he saw the strange car in the driveway that his parents had rented out the cottage since they wouldn’t be here to use it.

Three calls later, he realized the entire town was booked to the rafters.

He debated trying some of his parents’ neighbors. He had known many of them since he was a kid, but it was Christmas. They would have family in town. He didn’t want to intrude.

He went to Tate’s Tavern, expecting he’d either run into some friends or have a bite and drive back through the night to L.A.

It started to snow as he walked inside. Awesome. And the place was jumping. A live band had it packed with après-skiers and locals who finally had a night off. He scratched his bare cheek as he looked for a table and saw nothing.

Then, by some Christmas miracle, a couple rose as he was winding his way toward the bar. He sat down at the unwiped table, wished them a Merry Christmas, asked the people at the next table for their menu and looked for a waitress.

Idiot. Was that really why he’d driven seven hours on Christmas Eve?

He debated getting on the road and eating chicken fingers from a truck stop.

Then he spotted her through the crowd.

Her short bobbed-off haircut with the blue streaks had grown out to a tail that she had twisted into a clip. The ends still held a faded blue tinge where they hung in a wilted bouquet of fine strands at her crown. Her white T-shirt with the pub logo stretched as she lifted a tray over her head, moving in an awkward pivot through the crowd.

He was so weirdly happy and relieved to see her, he almost laughed aloud.

She met his gaze at that second. Recognition struck. Astonishment and the biggest smile started to break across her face, so bright it was like sunlight pouring warmth all the way through him.

Then she faltered. Her jaw slacked and something wary quickly followed.

His own grin was pulling at the corners of his mouth, inviting her to come to him, but a tingle of premonition crackled through his elation even as his brain was taking in that her face seemed a little rounder.

Someone moved and he could see the rest of her. Her breasts were decidedly plumper than the delicious handful he had cupped last Easter. Her hips might have been a little wider, too, but it was hard to tell with the apron tied around what used to be her waist. Her beach-ball of a belly was so perfectly round, with the rest of her beautiful figure just a little bit softer, but still quite slender, it looked fake. Cute enough to make him want to laugh.

Then he realized that pregnant meant she wasn’t single.

She wasn’t available. There was another man.

Wait. She was very pregnant. Like, nine months from Easter pregnant?

Pandora’s heart nearly leapt out her throat. Brock. She had tried not to think about him since ghosting him after their one night stand.

Actually, it had been more of a one-weekend sex-fest of something that had felt like more than lovemaking. Affinity. They’d talked about everything, some of it superficial, some of it deep. They liked the same movies and music. He cooked. She figured out a setting on his phone. He’d recently been downsized and was sorting out his life, returning to L.A. from several years in Texas. She told him how sticking with that idiot ex of hers had seemed like the only option because she had such a lousy relationship with her mother.

She’d stopped short of telling him everything about her mother, but not because she had been afraid to. The timing just hadn’t been right.

He had asked for her phone number when he left Sunday morning. She hadn’t expected him to call and he hadn’t, but he had texted. Several times. The flirty banter had gone on for 2 days, keeping her smiling non-stop.

Until she got the call from her doctor’s office.

With such a lot to think about, it had seemed kinder to let things fizzle. She hadn’t stopped thinking about him, though.

Now, as a rush of excitement rose like a flock of birds inside her, she also felt a stab of guilt. Guilt for ignoring him. For not offering any explanations.

Most of all, she felt guilty for getting preg—

Reminder – this book is included in On The Edge. It is not sold separately.