FAQ Category: About the Author

Do you visit the places you write about?

We’ve been lucky enough to travel so some of the places I’ve set books including Hawaii, London, Madrid, and New York. I’ve set more than one book in Whistler, BC, but I haven’t been there since I was very young.

Part of the problem is that I pick a location on a whim as I start to write. Then I start to research it and add it to our bucket list because I’m so enamoured. I really should plan ahead so we can visit before I start writing.

You seem to write a lot of different types of romance. Why?

I tried a lot of things on my journey to publication, which gave me a taste for trying a lot of things. I wrote Hustled To The Altar, The Healer, and the Secret Dreams Duet long before I published.

Shortly after I sold No Longer Forbidden? to Harlequin Presents, I had an opportunity come up with Tule and wrote Hometown Hero for Montana Born.

I discovered I really enjoyed writing small town romance along with the high fantasy of Presents, but I also had a lot of manuscripts on the hard drive that didn’t fit either of those publishers.

I’ve now indie published a lot of those orphans because I can.

Is it stressful to write under deadline?

It can be. I try really hard to finish books about a month ahead of when they’re actually due. It’s not always possible, but by setting myself a false deadline, I don’t freak out about the real one. Having said that, I’ve been known to get so wound up about my fake deadlines, my husband will ask me flat out, “Is this really due? Or are you making that up in your head?”

Is Dani Collins your real name?

Collins is my married name. Dani is my real name and it’s not short for anything.

How fast do you write?

My preferred pace is to two thousand words each day. Most Harlequins are around fifty-thousand words, but I’ve written books as long as one hundred and twenty-thousand words. Longer book with more character arcs and plot threads take exponentially longer. I aim to write four Harlequins a year and fit in at least two other books for another publisher in that time.

Where do you get your ideas?

I’ve always had imaginary friends in my head. Writing them down is virtually the only way to shut them up.

How many languages have your books being translated into?

Off the top of my head, I’ve received: French, Italian, Spanish, Japanese, Korean, Hebrew, Indonesian, Dutch, Swedish, Finnish, Norwegian, and German. I’ve also had a Japanese manga (graphic novel) arrive for Proof Of Their Sin which was super cool. 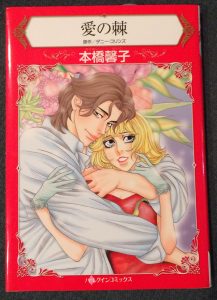 You can find the same title in French here:

In fact, I’ve started loading all my foreign editions.

Why do some of your books have different covers?

Those are all English versions and usually release on the same date.

They might later be picked up for translation by foreign language offices, but each office makes that decision on their own.

With the Montana Born covers, a lot were released as part of multi-author series, so they wanted a consistent look between all the authors, but after about a year, they rebranded on all of my covers to make them stand out as a series by me.

What is your process? How do you write a book?

Sit down and type until it’s done. That’s the short answer.

If the book is part of a series, I definitely do a lot more outlining and preplanning. Picking names is the first challenge. For virtually all of my books, I do a brainstorming exercise where I list all the reasons the hero and heroine resist each other, and all of the reasons they are attracted to each other. This starts to form the emotional arc of the romance. I often write a few paragraphs of back story about each character. About 70% of the time, I write a synopsis, then change things as I go along, so what’s the point in that? Not all of my publishers ask to see early chapters. Lately, I’ve been submitting full manuscripts. My editors offer feedback and I’ve been lucky in that I’ve never had a truly awful experience with revisions.

What would you do if you weren’t writing?

Writing. I asked myself this question many times while I was trying to publish and eventually realized that I write because I have to. So if I wasn’t published, I would have a day job so I could eat, but I would be writing and trying to publish so I could write for a living.