Happy Tuesday! I just caught a glimpse of Poppy and Rico from The Maid’s Spanish Secret and it’s so sweet and tender. I love it!

Fun Fact: Poppy is Canadian. She’s on holiday in Spain when she winds up robbed and broke. She goes to work in Rico’s parents’ mansion and, on her last day of work, has a tryst with the spare, Rico. His engagement has just ended and Poppy is finally heading back to Canada–but #spoileralert–she unknowingly carries a souvenir of their encounter.

Two years later, Rico is the one who feels robbed on many levels, most especially when he discovers he has a secret daughter. Here’s the back cover copy:

This marriage of convenience is a roller-coaster and has one of the most dramatic endings I’ve ever written. I hope you love it!

(But you’ll have to wait until August to read it. I’m sorry! <<--also Canadian.) 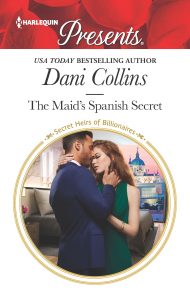